I'm back in the studio, cleaning up the wreckage left by the painting frenzy caused by the Arts on King show.

It's often hard to get going after a show. I never know what to paint the week after a show, even if I look at my must-paint list. I usually doodle with frustrating aimlessness for a while, and those drawings rarely work. Probably in some kind of creative hangover mode.

Sometimes I have to just grind through it and hope I come up with something eventually. Sometimes I'll get lucky though, and I'll realize in a flash, while doing dishes or something like that, what it is that I want to do. what I want to paint unencumbered by the pressures, real or imaginary, of what I think my (awesome) audience wants.

That pressure is always there, by the way, and it has to be if you're trying to actually sell paintings to pay mortgages. It's neither good nor bad, it's just a fact of the process. That said, it usually works out better if I can filter through that and figure out what I'll be happiest doing, because that feeling permeates the paintings and makes them more attractive, and that makes them more sellable. Bonus!

So now I'm doing some small pieces for Arts on King and for the upcoming shoe at the Cube Gallery. And I know what I'm doing. :) 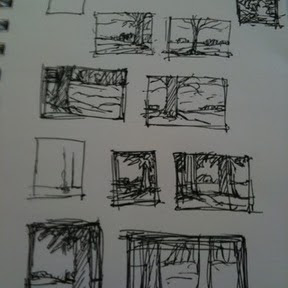 Check back here to see what that is!