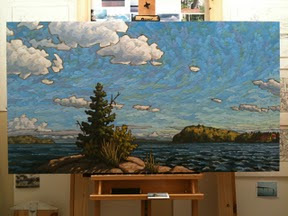 It's 30x54, so I'm continuing on the large trend. They take more mental stamina and concentration, and have s good payoff if you sell them, but that's a big if so they are a much bigger gamble.

Still have to get some minis done for muskoka though.

Outpost - are we there yet?

I feel like a kid in a vinyl clad back seat on a summer trip in the days before vehicular air conditioning - I keep asking myself if it's done yet, even though I know I have a long way to go still. These big paintings have a lot going on, and take a long attention span.

I think the sky and the clouds are working pretty well, although I've been back over them a few times. I think I'll probably adjust the water too, because I'm not really sure about it yet. Here's the photo: 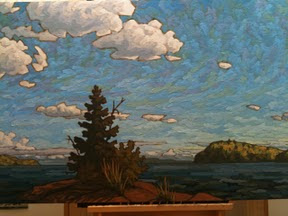 Posted by Unknown at 5:07 PM No comments:

For my next painting I've decided to do a larger version of Outpost ( http://www.marcelguldemond.com/Artwork/Details/794 ) 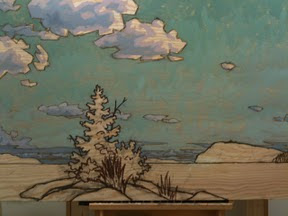 Posted by Unknown at 9:25 AM No comments:

I've finished cleaning up the images and uploading them to my website, and I've made about 20 of them available for your viewing pleasure: http://www.marcelguldemond.com/Artwork
Posted by Unknown at 10:45 AM No comments:

New Art Festival in the books

Wow, The New Art Festival is over, so that's another outdoor show come and gone. They just kind of whip by, and I don't even do that many of them! The weather on Saturday turned out to be very nice, despite the ominous looking forecast, and there was a great turnout to the show with big crowds wandering around the park. The weather on Sunday, however, stayed with the forecast and really was totally crappy. It was cold and raining almost all day, but people still turned out in good numbers, reinforcing my opinion that Art in the Park/The New Art Festival is one of the best outdoor shows in Ontario.

A number of people who already have some of my paintings came by during the show and told me that they look at their paintings every day and it makes them happy. That's probably just about the best compliment that I think someone could give me about my art, so wow, thank you very much for that.

Now that my travelling outdoor gallery has been dried out in the backyard and put away again, I'm off to make some paintings for the next show, which is in Muskoka in July.

PS. I'll be posting the new paintings to the website shortly.
Posted by Unknown at 10:21 AM No comments:

At the New Art Festival

Today is cold and wet, but people are still coming out. Here's my booth: 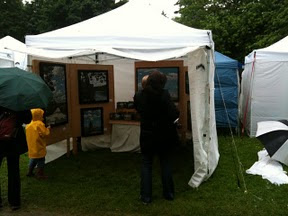 Day one in the books

Although it was cloudy and drizzly early this morning, the weather today turned out to be nearly perfect. Add to that that great guy Peter came by to help me set up and that lots of friends and neighbours and people in general came by during the day, and it turned out to be a great day.

Forecast is still rain for tomorrow but today was such a good day that it's not bothersome at all any more.

Posted by Unknown at 7:05 PM No comments:

I was half way done loading my indoor booth wall panels onto the roof rack, when I suddenly decided to double check how talk my tent is. The tent is just over 7ft. The panels are 8....

Would've sucked to be at the park in the rain tomorrow morning and have realized that then. Now I'll just have to stick with my older smaller outdoor setup from last year.

That was a close one.

Posted by Unknown at 4:43 PM No comments:

Looks good in a frame

I'm always pleasantly surprised how much of a difference a good frame makes. This one come from my neighbour Patrick Gordon. It's also nice to see the paintings hanging in my house, especially because I never know how long it's going to be around for. 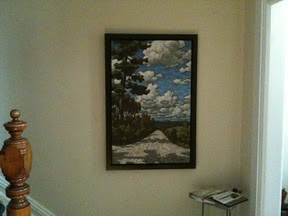 Posted by Unknown at 8:42 AM No comments:

Art in the Park / The New Art Festival this weekend

Just in case you missed it, the Art Festival formerly known as Art in the Park is going on this weekend at Central Park in the Glebe neighbourhood in Ottawa this weekend. All of us artists will be there rain or shine (hopefully more of the latter and less of the former) so come on by and say hello if you get a chance. More info here: www.artinfoboy.org

cheers,
Marcel
Posted by Unknown at 3:02 PM No comments: