Here's another photo of the same painting, but with a bit more of my messy studio. You can see the easel that I slapped together last year when I was trying to get ready for the One of A Kind Show in Toronto. I'm not very happy with it anymore, especially with the fact that I can't move a painting up and down while it's on there. This is an issue if I'm working on the bottom of larger piece, because I basically need to kneel to be able to use the brush at the right angle. And I need a screw driver just to adjust the height. So I get frustrated and grumpy, and somehow I don't think that grumpy paintings sell that well.

So I'm now contemplating buying a new studio easel, but those can be expensive and large, and my studio is small, so I'm also contemplating building something myself. It's basically a business decision: a good quality easel would pay itself in a few years by reducing the time I spend moving the painting or myself around, greatly reducing the number of grumpy paintings I produce, but it is an upfront cost, and I can only absorb so many of those. On the other hand, building one myself does save some money, but it also takes more time, which keeps me from painting, which keeps me from making money, so it has what I believe is called an opportunity cost. What the hell. I'll figure it out (hopefully soon) and I'll post the results.

I'm going to try out posting photos of work in progress on this blog. My fear is that I'll get some kind of stage fright if people get so see pieces before they're finished, because I'll get worried about wrecking it in the later stages. I suppose if that happens I could just pretend it never existed. Then if someone asks me about it, I'll use a Jedi mind trick and tell them it was not the painting they were looking for. Seriously, it was a different painting that went up in flames in the backyard.

Well, this one hasn't gone up in flames yet. Enjoy: 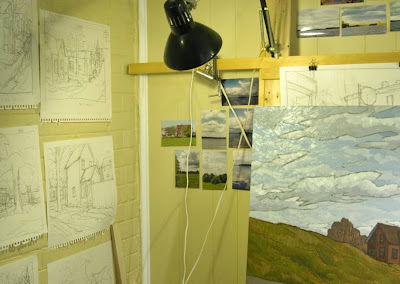